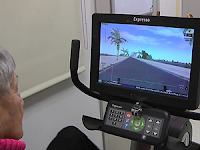 Woman viewing 3-dimensional landscape while cybercycling.
Virtual reality–enhanced exercise games such as the Wii Fit and PlayStation Move have become popular and tend to increase the appeal of exercise. These so-called "exergames" have the potential to increase fitness by shifting attention away from some of the aversive aspects of working out, and toward motivating features such as competition and 3-dimensional scenery.

Read more »
Posted by MSnewsChanel.com.com at 1:57 AM 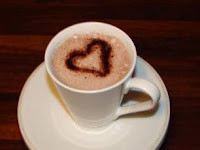 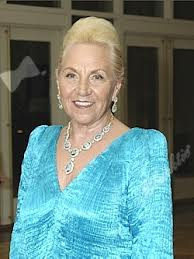 Drinking cocoa, whether rich in flavonoids or not, appears to boost the effect of blood flow on neuronal activity in the brain, known as neurovascular coupling (NVC).

A new study shows not only that drinking flavonoid-rich or flavonoid-poor cocoa improves NVC but also that higher NVC is associated with better cognitive performance and greater cerebral white matter structural integrity in elderly patients with vascular risk factors.

As researchers search for ways to detect dementia at the earliest possible stage, the study results could pave the way for using NVC as a biomarker for vascular function in those at high risk for dementia, said lead author Farzaneh A. Sorond, MD, PhD, Department of Neurology, Stroke Division, Brigham and Women's Hospital, Boston, Massachusetts.

Read more »
Posted by MSnewsChanel.com.com at 11:03 AM